Our mission is simple: QUALITY WORK AT A FAIR PRICE!
We Carry The Following
Get A Quote!
Information
We Service The Following Areas
Carrier Products 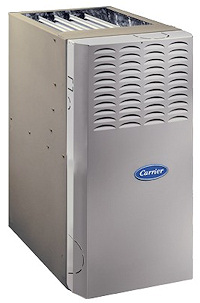 The mission statement of Carrier is, 'To be our customers' first choice for heating, air-conditioning and refrigeration systems,' and the company has been providing the quality, innovation and commitment to live up to this goal since 1902. It was in 1902 that Carrier's founder, Willis Carrier, invented the world's first system for 'manufactured weather', now known as air-conditioning. Today, Carrier has over 45,000 employees in 172 countries across the world, and the company's global operations are directed from its Farmington, Connecticut headquarters.

Willis Carrier was educated at Cornell University, where he obtained a degree in Electrical Engineering. Throughout his life, he developed numerous innovations in the field now known as air-conditioning. Carrier's 'slide rule' was the Thatcher Calculator, invented in England and patented in the U.S. in 1881 by Keuffel & Esser. It was a cylindrical tube with twenty numeric scales and rulers that could be turned and manipulated to make calculations, essentially today's slide rule on steroids. In Carrier's hands, it was the first scientific instrument that was able to calculate dewpoint control, an advance essential for the development of modern air-conditioning.

Next, inspired by the fall fog swirling around him as he waited for a train in Pittsburgh, Carrier set out to refine the basic principles of air-conditioning that he had already been the first to develop. Now, air-conditioning did not just mean cooling, but it would also control humidity, air circulation and ventilation, and cleanse the air. Carrier's 'Apparatus for Treating Air' was patented in 1906, and soon became popular in commercial establishments such as banks and cotton mills.

Carrier continued to innovate. Existing systems used a flammable refrigerant, so Carrier developed a new, centrifugal system, that was both safer and more suitable to temperature and humidity control in large public and commercial buildings. Carrier also supported the American war effort in World War II, providing refrigerated coolers for the Navy and air-conditioning systems for munitions factories, cargo vessels and warships. Carrier even adapted their factories to be able to produce essential military items for U.S. forces themselves, such as sight hoods for guns and airplane engine mounts. In recognition of Carrier's extraordinary efforts, the company was awarded the Navy 'E' Award no fewer than six times, an honor shared only by 13 other companies.

After the war, Carrier continued to innovate, developing air-conditioning systems for trolley buses and aircraft, as well as equipping the new Secretariat building of the United Nations with its 'WeatherMaster' system. In 1980, United Technologies Corporation purchased Carrier. However, Carrier's commitment to innovation and development continued; Carrier ceased production of units containing CFC gases two years in advance of the U.S. ban, and by 2006, Carrier was producing units with a seasonal energy efficiency rating (SEER) of 21, saving customers up to half their previous energy consumption. In recognition of the incredible innovation by Carrier, Willis Carrier was named one of Time magazine's '100 Most Influential People of the Century' in 1998.

Carrier is committed to not only the most innovative air-conditioning solutions on the market today, but also the best environmental protection practices. Back in 1988, Carrier was one of the first U.S. Companies to reduce energy consumption in its factories. Carrier has always believed that, 'Industry leadership requires environmental leadership,' and environmental stewardship is one of Carrier's core values. Between 2000 and 2009, Carrier reduced its air emissions by 76%, and its water usage by 52%.

You can always be assured that Carrier's quality and craftsmanship are second to none. Carrier systems are installed in prestigious locations around the world, including the Sistine Chapel and Uffizi Gallery in Italy, Singapore's new Changi International Airport, the Great Library of Alexandria in Egypt (home to thousands of ancient manuscripts) and Jacksonville Baseball Park.

Ethical values are also an important part of the Carrier philosophy. Respect for its employees and care for their health and safety, customer satisfaction, and competition based on product quality are key values, and part of why Integrity Air & Heat Inc. is proud to be associated with the Carrier name.

Carrier produces a full line of domestic furnaces, air conditioners, air filters and heat pumps, to provide a comfortable indoor environment whatever your climate and your domestic heating and air-conditioning needs. Carrier units are highly efficient, with energy ratings of up to 21 SEER, so you can save money while also knowing you are playing your part in protecting our environment. Carrier systems also contain the best air filters available, to ensure the highest indoor air quality. Worldwide, a Carrier domestic unit is installed every six seconds, a testament to Carrier's renowned quality.

Carrier also has a long history of providing the hospitality and food service industry with the best chillers and refrigeration units on the market. Whether you need refrigeration for a grocery store, convenience store, bar or restaurant, a Carrier unit and Integrity Air & Heat Inc. installation can provide the perfect solution for your specific business needs. Carrier is also proud of its complete range of transport refrigeration solutions, that allow safe and reliable transportation of perishable food and medical supplies around the world.

Integrity Air & Heat Inc. Is Ready When You Are

Contact Integrity Air & Heat Inc. today to learn more about Carrier heating and air-conditioning systems, and how they could benefit your home or business. Integrity Air & Heat Inc.'s experienced, dedicated heating and air-conditioning engineers and technicians will be delighted to assist you with all your installation and servicing needs, throughout the Brevard county area.